A clinical trial at Dana-Farber has kept Sharon DeCosta’s stage IV metastatic breast cancer stabilized for three years, allowing her a full life of traveling and doting on her three young grandchildren, with a fourth due in December.

It may seem odd that DeCosta celebrates the anniversary of her diagnosis each year with a toast, until you realize the significance of the date.

“I found out I had cancer on April 27, 2015—my twenty-fifth wedding anniversary,” says DeCosta. “When the doctor told me I thought, ‘Wait a minute, I’m supposed to be on a beach somewhere sipping on a margarita, not hearing this.’”

She laughs recalling the moment, and it is this ability to poke fun at her circumstances that DeCosta credits for helping her through. That and Ann Partridge, MD, MPH, founder and director of the Young and Strong Program for Young Women with Breast Cancer at the Susan F. Smith Center for Women’s Cancers at Dana-Farber. 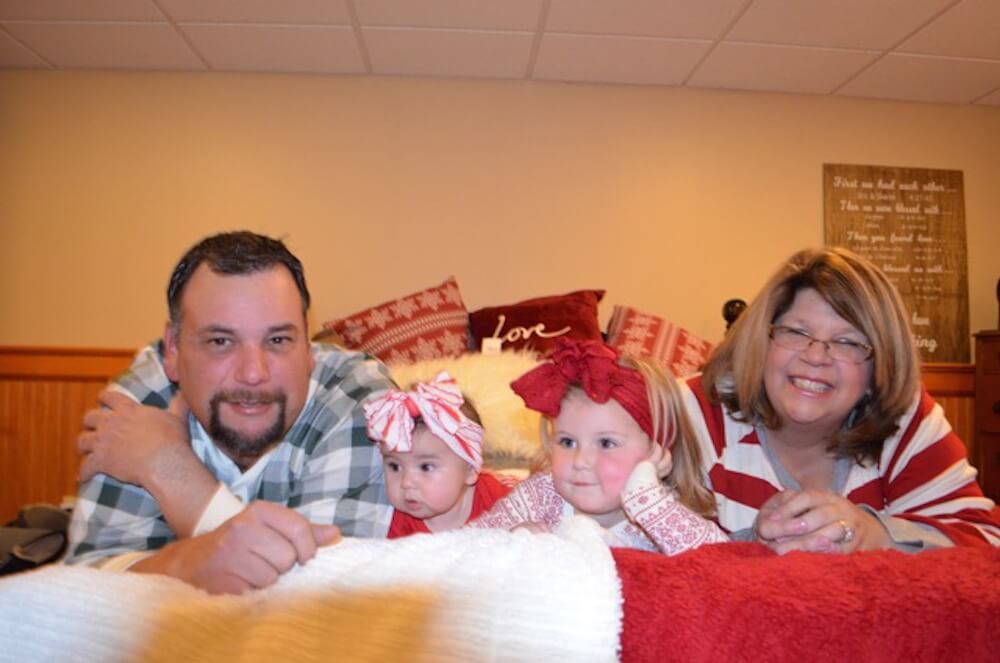 DeCosta and her husband, Eric, with their grand-daughters Henley and Aubree.

DeCosta, then 47, had been preparing for a vacation to mark her and husband Eric’s 25th anniversary when anemia sent her to the emergency room in April 2015. Doctors initially planned a hysterectomy, but the surgeon found cancer when he began the procedure. Once it was determined that the disease had spread from DeCosta’s breasts, the Lakeville resident headed up to Boston to meet with Partridge.

“From the first time I met her, Dr. Partridge put me completely at ease,” says DeCosta. Partridge told her about the advancements in treatment for metastatic breast cancer that have been made in the past few years, such as immunotherapy and targeted treatments.

“She assured me she had a big bag of tricks to use, and we were going to get through it one step at a time,” DeCosta says.

In June 2015, Partridge started DeCosta on a phase III clinical trial of the drug ribociclib in combination with an aromatase inhibitor. The treatment has since been approved by the FDA, and DeCosta is continuing the regimen with no reported side effects. She takes oral chemotherapy daily at home and comes to Dana-Farber every month for check-ups.

“Patients like Sharon with advanced breast cancer are doing much better, benefitting from advances in targeted therapy and clinical trials to test new innovative approaches that are bringing the breakthroughs to patients faster and faster,” says Partridge, who also heads up Dana-Farber’s Adult Survivorship Program.

Taking Partridge’s advice to heart, DeCosta has also been taking plenty of steps to help herself and other cancer patients. She captains the “Sharon-Do More for 4” team each September in the Boston Marathon® Jimmy Fund Walk presented by Hyundai, joining thousands of other individuals—including many cancer survivors—walking all or part of the famed 26.2-mile Boston Marathon course to fund research and treatment at Dana-Farber.

“We did the Jimmy Fund Walk for the first time just a few months after my diagnosis,” says DeCosta. “I felt like it was a way to give back to the people who have done so much for me. My family and friends all take part now, and this year we hope to have more than 25 people walking, including some grandchildren.”

For her dedication, DeCosta has also been named a Jimmy Fund Walk Hero—and her smiling face will adorn one of the mile markers along the Hopkinton-to-Boston route. Below it is a quote from her: “Thanks to my rock-star team at Dana-Farber, I am living with metastatic breast cancer, making memories to last a lifetime with lots of love and laughter, surrounding myself with family and friends.”

Save the Dates August 1-7! It’s time for Bakes for Breast Cancer Cape & Islands!