In the days ahead, Alicia Gaudio will be visited by a woman she has never met to receive a gift she wishes she wouldn’t need.

Nicole Rowe, holding the wig she wore during cancer treatment, with her husband Michael, daughter Jordan and son Alex. She is giving the wig to Alicia Gaudio.

Ms. Gaudio, who is 23 weeks pregnant, learned two weeks ago that she has breast cancer. On Thursday, the 40-year-old attorney from Mt. Kisco, N.Y., underwent a mastectomy, which will be followed by chemotherapy.

The gift—a stylish brown wig—is intended to help her return to good health. It will be delivered by Nicole Rowe, who wore it after she lost her own hair during breast cancer treatment last year. “We call this the healing wig,” Ms. Rowe, an optician, plans to tell Ms. Gaudio.

For four years, the wig has been passed from woman to woman with cancer, all friends of Vanessa Pacella, a psychotherapist in Wellington, Fla., who bought it for $5,000 after her own diagnosis. “When you wear this wig and look in the mirror, you see yourself as a healthy person,” says Ms. Pacella. “There’s a lot to be said for positive energy.” Adds Ms. Rowe: “That wig got me through.”

Why do human beings attach such great power to objects that are given to them, especially in times of crisis? For thousands of years, civilizations have embraced the mystical possibilities in amulets and talismans. Now science is explaining how these items actually work, and why, in today’s digital age, they often take on even more significance.

“It’s not voodoo,” says Barbara Stoberock, a researcher at the University of Cologne in Germany. “It can be explained. If you have a lucky charm, and believe it helps you, there’s a psychological mechanism. It lifts your beliefs in your own capabilities, and gives you a boost.”

In a study released this year, Ms. Stoberock and a team of social psychologists found that people are more likely to attach superstitions to items during moments of uncertainty—when they’re under high stress and low levels of perceived control.

The researchers conducted several experiments in which subjects performed better on memory and dexterity tests if they had personal talismans with them, whether stuffed animals, childhood blankets or inherited jewelry. 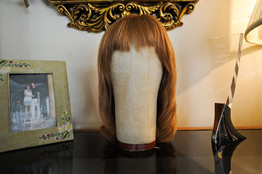 The ‘healing wig’ worn by Nicole Rowe when she lost her hair amid chemotherapy treatments. Now, the wig is being sent to another woman who will be receiving breast-cancer treatments.

“It’s the talisman placebo effect,” says Scott Sandage, an American history professor at Carnegie Mellon University who has studied success and failure in America. “There’s a desire to have a physical token of a wish. It’s tangible, and if it worked for someone else, you think it’s more likely to work for you. It has a track record.”

Erika Tinker was the 80th bride to tape the same Scottish sixpence into her shoe. Her husband’s grandmother, in 1936, had been the first. On her wedding day in 2004, Ms. Tinker, a preschool teacher in Castle Rock, Colo., felt that the coin marked her symbolic arrival into her husband’s family. But now, six years later, she won’t discount the possibility that the coin has special powers. “All I know is that my husband and I are very happy,” she says. (There is a list of the brides who’ve used the sixpence, but no record of whether their marriages were happy or long-lasting.)

While such old-fashioned superstitions continue to resonate, people today also find meaning in less-traditional talismans. San Francisco Giants first baseman Aubrey Huff has gotten attention for wearing a red, rhinestone-trimmed thong under his uniform, which he believes helped his team make it to the 2010 World Series.

Thirteen California women made news a few years ago when they purchased a $37,000 diamond necklace together and took turns wearing it. Each agreed to make love at least once with it on. The women said the necklace bonded them and helped change their lives.

Meanwhile, a recent book, “Three Wishes,” tells the true story of Carey Goldberg, a single woman who at age 38 decided to find an anonymous sperm donor. Shortly after buying eight vials of sperm for $175 each, she fell in love with the man who would become her husband; they conceived a child naturally. She passed the vials on to Beth Jones, who also ended up falling in love, having a child, and never using the vials. The vials were then passed on to Pamela Ferdinand, who proceeded to fall in love and have a child naturally. 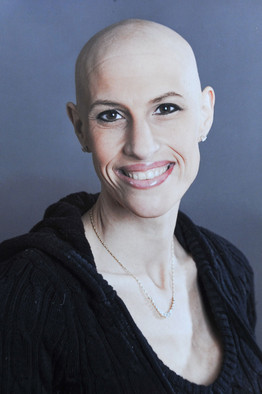 The unused vials of sperm became talismans for romance, luck and motherhood. “Especially for me, as the third recipient of the sperm, I saw the strength and sense of freedom it gave Beth and Carey to take control of their lives,” says Ms. Ferdinand. “That gave me hope.”

It’s often assumed that unsophisticated people are most likely to be drawn to talismans, but intellectuals and corporate titans are drawn to them, too, says Dr. Sandage.

Personal talismans often are most meaningful when they offer a sense of connection to a time, place or community. Dr. Sandage, 46, keeps a small box on his office desk, which contains an odd assortment of items, including a hose clamp, a chrome lug nut, some brown string, and a 13/64th drill bit. After his dad died last year at age 88, this box was discovered among the few belongings he’d brought with him when he moved into a nursing home. The old man never talked about why he held on to these stray items, but Dr. Sandage now sees them as talismans linking him to his father. He finds it comforting to think of the small box “as a kind of survival kit that got him through 88 years.”

In some communities, efforts are under way to get older people to talk about their personal amulets before it’s too late. The Boston-based Keepsakes Project, for instance, invites senior citizens to be videotaped telling personal stories about their keepsakes. The videos are shown on local cable television.

As the world changes, and we age, material objects that we find meaningful remain the same, says Susan Bosak, chair of The Legacy Project, an educational organization that connects generations. Older people struggling with dementia can use talismans to recall happier memories. The objects trigger connections in their brain that can’t otherwise be accessed.

Given the pace of technology today, “everything is so fleeting,” says Ms. Bosak, who dismisses much of our online interactions as “McMoments.” “These McMoments don’t feed our spirits. Kids, especially, need a sense of rootedness. They have a real need for lasting family keepsakes.”

Ms. Bosak’s father died in July, and she feels a strong connection to his sweater. “When I touch it, I feel like I’m touching him,” she says. “We can use an object almost like a compass. If we’re feeling lost and directionless, we can go to it, and the values it represents, and that helps us get our bearings.” 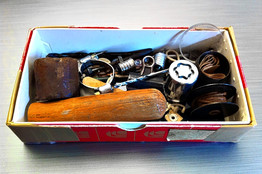 Scott SandageThese items—including a clamp, bolt and drill bits—were among the few belongings Scott Sandage’s father brought with him when he moved into a nursing home. After his father’s death, Dr. Sandage, held on to the items, drawing comfort from their connection with his family.

In that spirit, “the healing wig” offers a shared strength, and a path back to health, say the women who’ve worn it. Before she passes the wig on to Ms. Gaudio, Ms. Rowe will have it washed and blow-dried at a salon near her home in Salisbury Mills, N.Y. She plans to encourage Ms. Gaudio by telling her that the three women who’ve already worn the wig are now well. She’ll also share a story.

Last winter, after Ms. Rowe went through chemotherapy, she promised her 3-year-old son, Alex, that her hair would return when the leaves were back on the trees. The first time Alex saw her in the wig, he got excited. He ran to the window, and even though it was still winter, he shouted, “Mommy, I can see the leaves coming back on the trees!”

The wig’s magic reaches beyond those who’ve worn it, Ms. Rowe says. It helped her little boy imagine the possibilities of spring.

Write to Jeffrey Zaslow at jeffrey.zaslow@wsj.com